Ottawa – The Canadian Teachers’ Federation (CTF/FCE) honoured the careers and contributions of four outstanding educators during its Annual General Meeting, recognizing their longtime contributions to the teaching profession and to publicly funded public education in Canada.

This year’s CTF/FCE Outstanding Indigenous Educator is Tesa Fiddler, a member of the Ontario English Catholic Teachers’ Association (OECTA). Tesa has worked in the education sector for 20 years, beginning as a tutor escort in Muskrat Dam First Nation. She then taught special education for seven years at Dennis Frank Cromarty High School, spent two years in Indigenous studies at the Lakehead District School Board, taught Ojibwe through the Thunder Bay Catholic District School Board, and, a few years ago, undertook the role of Indigenous education resource teacher with the same board. In this most recent role, Tesa provides curriculum supports with Indigenous perspectives, while planning and facilitating Indigenous-focused professional learning opportunities for Board staff. She also manages Indigenous education funding proposals, plans, budgets and reports to the Ministry of Education and other funders.

For years, Tesa has worked to ensure culturally relevant, safe and appropriate learning spaces for Indigenous students, establishing connections with the Indigenous community in an effort to enhance student learning. Some of Tesa’s efforts have been focused on improving children’s mental health, supporting teacher professional development, building and bettering relationships between the education system and Indigenous families.

Tesa’s role as a teacher and support person extends well beyond the classroom. She is also a member of the Parent Council for the Children’s Centre Thunder Bay, which serves as an advisory and advocacy group. She is on the Neegahneewin Council, which is the Indigenous Advisory Council for the Confederation College in Thunder Bay. Tesa has also served for ten years on the Aboriginal Headstart program.

The CTF/FCE Indigenous Elder is Deb St. Amant (Bezhig Waabshke Ma’iingan Gewetigaabo) of the Elementary Teachers’ Federation of Ontario (ETFO), who is the first Elder-in-Residence at Queen’s University Faculty of Education, a position she has held since 2017, and is also the coordinator of the Aboriginal Teacher Education Program at Queen’s.

Deb has facilitated Indigenous education workshops throughout Ontario, from Attawapiskat to Windsor, for COPA, ETFO, the OTF, the Ontario Arts Council, and the Indigenous Education Office of the Ministry of Education. She has co-presented at the Indspire Conference, and co-written Indigenous resources for COPA, the OTF, ETFO, and Right to Play. In 2014, Deb authored a book for pre-service teachers called First Nations, Métis, and Inuit Student Success.

Deb taught in the elementary panel for 30 years, retiring in 2012. She was the first Indigenous person elected to the provincial Executive of ETFO where she served for four years (while still teaching full time). She was a member of the OTF’s Board of Governors and the CTF/FCE’s Advisory Committee on Indigenous Education. The CTF/FCE chose Deb to represent the Canadian teachers of Indigenous ancestry at the Sixth Education International (EI) World Congress in Cape Town, South Africa, where she shared Shannen’s Dream with the Indigenous Caucus.

Her passion for Indigenous education has her busier now than ever before.

The first of two CTF/FCE Special Recognition Award honourees is Diane Dewing of the Ontario Teachers’ Federation (OTF), a teacher who has used her skills and passion for teaching to reach beyond the classroom and affect positive change. Fuelled by her fundamental belief that together we can build a better world, she has done the hard work on the ground to pull communities together to achieve a common goal. As a teacher unionist for over 36 years, she is known for asking questions that prompt action. During her career she has served as a local president for 18 years, as an ETFO provincial Executive member for 12 years, as an OTF Executive member for 4 years and, this past year, as a member of the CTF/FCE Board. This year she serves as President of the OTF.

Diane has always been generous with her time and expertise. At ETFO she has served on ten task forces, two work groups and seven provincial committees. The OTF has enjoyed her participation on seven committees and she has served the CTF/FCE on both the Advisory Committee on Diversity and Human Rights and the Nominations Committee. Beyond federation work, Diane sat on the boards of Community Living North Grenville and Lanark County Interval House. Community Living Ontario frequently called upon her to develop education policy, to serve as a conference facilitator or to represent them during government meetings. She speaks at Canadian Labour Congress (CLC) meetings and has served as a delegate to both the Ontario Federation of Labour and CLC conventions since 2007. She has attended every CTF/FCE annual meeting since 2008. In 2018 she was awarded the Carol McGregor Disability Activist Award by the CLC.

The second recipient of the Special Recognition Award is Alan Lombard, of the Quebec Provincial Association of Teachers (QPAT), who has completed an impressive career of 50 years in the field of education, including more than 40 as union leader/representative. His union activism took its next major step when he became a teacher representative on the negotiation team of the Provincial Association of Protestant Teachers (PAPT) for the 1976 round of provincial negotiations. During that time, he was named PAPT’s Chief Negotiator, a post he then held for more than a decade, and during which time he negotiated four provincial agreements on behalf of the Association. These agreements form much of the basis of the current agreement and included many significant improvements to working conditions that last to this day.

Over the course of his long career, he worked on the creation of his own local union, was in the forefront of the development of the Quebec teachers’ collective agreement, contributed to the foundation and development of Quebec Provincial Association of Teachers (QPAT) as an organization, and helped thousands of teachers through the support he provided to QPAT’s local unions. In 1988, he became Executive Director of the Association. Alan was instrumental in the shaping of the organization and continued to be involved during numerous rounds of provincial negotiations, contributing greatly to the enhancement of the provincial collective agreement to the benefit of teachers across the province. 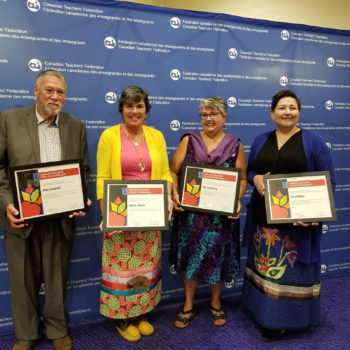