Acting together across North America for public education

The North American Free Trade Agreement (NAFTA) of 1994 was the first “trade agreement” that incorporated services as an element of international trade. As such, it was both a symbol of the dangers of commodifying services such as education and an institutional structure to enforce harmonization of both rules and services.

Concern about these dangers was the motivation when the Tri-national Coalition in Defense of Public Education was first organized a quarter-century ago. It brought together education activists in the three NAFTA countries with the intention of monitoring events, exchanging information and sharing strategies for defending public education in Canada, the US and Mexico.

Every two years the Coalition has organized a conference to bring together activists to learn from one another, visit schools, and build solidarity. The most recent conference was in November 2018 in Orizaba, Veracruz, Mexico, following previous conferences in Vancouver and Chicago. The Coalition is not a formal organization, but it attracts participants from education unions in all three countries, as well as from across Latin America and, most recently, the National Education Union of the UK. Members of several Canadian teacher unions and CTF-FCE officers have taken part over the years.

So how did the concern about the impact of NAFTA on public education that initiated the Coalition work out? In the 1990s, there were a variety of proposals, for example, for teacher certification that would be common across countries. No chance that would happen—neither Canadian provinces nor US states can even agree on common certification requirements within their own countries.

NAFTA itself hasn’t turned out to have much direct impact on public education—nor is the Trump-imposed new version likely to either. However, NAFTA was part of a globalization trend that has had an impact—the General Agreement on Trade in Services (GATS), the education policies of the Organisation for Economic Co-operation and Development (OECD) and its PISA program, and the general adoption of neo-liberal economic policies.

Common patterns affecting public education have developed internationally. While each country—and even each province—has its own version, these are some familiar themes:

All these were discussed at the most recent Tri-national Conference. In each case, reports from each of the three countries initiated the discussion, including strategies for dealing with each topic.

A rich part of the Tri-national Conferences has been school visits—a chance to see what actually happens in classrooms in a country and a culture different from one’s own. This experience is too seldom a part of international teacher conferences.

They can serve as points of comparison, inspiration, and solidarity.

We see ourselves much more clearly when we have a chance to look outside ourselves. Through comparison, we can understand our own problems in a broader context, as well as developing a better sense of our own privilege as public school teachers in Canada.

The Indigenous teachers we visited in Orizaba, Veracruz are an inspiration for what can be accomplished against great odds. They are creating a school to preserve their Indigenous language and culture for future generations. Teacher leaders in Chicago say that hearing about Canadian unions at a Tri-national Conference was an inspiration for the work they did to revitalize their own union that has itself served as an inspiration to the hundreds of thousands of teachers in the US who went on strike last year for improved conditions.

Solidarity can come in unexpected ways. When the BCTF was on an illegal strike in 2005 there was a chance that the courts would direct that the BCTF website not be used for communications related to the strike. The Mexican Section of the Tri-national Coalition created a website that could be used by the BCTF if it needed to.

More than 30 million of us teach in public schools globally and have a common interest in the defense of public education. The Tri-national Coalition is one of many ways that we act together on behalf of that common interest.

Larry Kuehn is Director of the Research and Technology Division at the British Columbia Teachers’ Federation. 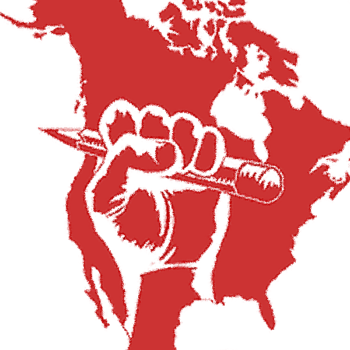