Privilege. When most people hear the word “privilege” they automatically assume a negative context, an oppression of some sorts. That is not the case. Privilege can be examined in many aspects, and is something that everyone has in some form—20/20 vision, perfect hearing, able bodied, cisgender, straight… As a cisgender straight woman, I use that privilege to work within the community as an ally and advocate for improve conditions. I view my privilege as a tool that can be used. In that manner, what we need to concern ourselves with is what we are doing with our own privilege, and how that affects others.

Another concept to explore is micro-aggressions. They are defined by the “everyday verbal, nonverbal, and environmental slights, snubs, or insults, weather intentional or unintentional, that communicate hostile, derogatory, or negative messages to target persons based solely upon their marginalized group membership.”[1] The idea of approaching someone who does not fit into the dominant culture, and assuming that they are foreign-born or assigning intelligence to a person of colour or basing it on gender. These are a few aspects, of a long list, that affect our daily living and decision making processes. By recognizing what they are and how they are used, we can change the narrative that exists in everyday society.

Micro-aggressions and personal privilege are two major aspects of every individual that can affect moral judgement. Now, this is not to say that people are intentionally racist or homophobic or sexist if they use micro-aggressions; sometimes it depends upon awareness and understanding. If we do not know what micro-aggressions are, how can we change how we act upon them? They are also culturally constructed. What is experienced in one part of the province, may not be experienced in another province; however sometimes culturally constructed norms do become nationally constructed norms, such as the gender question that is happening in the United States currently.

Beginning in 2015, the ARC Foundation, based out of Vancouver, British Columbia, began a movement that sought to have a Sexual Orientation and Gender Identity (SOGI) coordinator in every school district, with the intention to support teachers in teaching about diversity and to source inclusive materials into the classroom. In 2016 there were 9 participating school districts, and 53 in 2017.[2] In 2016, the then Education Minister Mike Bernier, mandated that all school districts were to update policies to include explicit references to sexual orientation, gender identity, and gender expression within the 2016 school year.[3] Nationally, with the passing of bill C-16 in July of 2017, gender expression became a protected right across Canada. There have been many steps forward to help support our transgender students at the school level, but there is still so much more work to do.

The BCTF created a workshop titled “Creating a Gender-Inclusive School Culture” that examines actions schools can take to help all students feel safe and accepted at all times. This can be as simple as changing language from “ladies and gentlemen” or “boys and girls” to “friends” or “folks.” By shifting language to a gender neutral context, we include more of our students and encourage them to feel welcomed in any situation. There is one elementary teacher in Vancouver who gives her class a different animal each year: “Let’s go to the gym, kangaroos,” “Time to clean up, speedy turtles,” or “It’s sharing time, little lions.”

Another action lies within establishing gender neutral washrooms in schools. As gender is a spectrum rather than a binary concept, a single classroom may have many students that identify outside of the female or male context. According to psychology, gender identity is self-understood before students even reach kindergarten. In having only gender-specific washrooms, gender-variant students feel erased and uncomfortable from having to only choose between two norms. This results in a rise in bladder infections amongst the trans community, as individuals would rather try to wait until they get home than potentially risk their safety in a gender specific washroom. This is easily mediated by providing at least one single occupancy washroom—labeled as simply “washroom”—in every school that is easily accessible to everyone in the school: this means teachers, administrators, staff, and students. By opening it up to everyone, this presents a safe space to all individuals, and also avoids the potential of outing a student who may not be public with their identity.

Providing inclusive materials in the classroom helps increase awareness among all students, but more importantly, helps to create safe spaces in our classrooms. All students deserve to see themselves reflected within the curriculum and with a recent surge in mental health understanding and research surrounding LGBTQ2S+ topics, teachers are beginning to use inclusive teachings to try and promote health outcomes for students in a well-rounded manner. Research demonstrates that “information and education for children was a key component of [supporting] gender-variant children’s needs.”[4] Each teacher will have a different level of comfort when it comes to using the materials on a regular basis, but we all have to start somewhere. Many helpful resources can be found on the SOGI Education website and are organized by grade level and subject area. Every single lesson is a vital opportunity for growth and understanding.

Finally, creating and supporting a Gender-Sexuality Alliance (GSA) in schools is another avenue of support that teachers can provide for LGBTQ2S+ students. As trans students are the most marginalized, creating safe spaces for students to meet safe people is important. Forty-five per cent (45%) of trans students will attempt suicide before the age of 18. This is due, in large part, to the lack of family support but also to the lack of a connection to others. Our students spend upwards of 35 hours a week at school, thereby making it important that they all feel safe through the day.

Cossman, Brenda, and Ido Katri. “Today, Trans Canadians Celebrate Bill C-16. Tomorrow, the Work Begins for Us All.” The Globe and Mail. June 16, 2017.

Kane, Laura. “B.C. Schools to Add Protections for LGBTQ Students in Anti-bullying Policies.” The Globe and Mail. May 17, 2018.

Nichelle Penney is a Kamloops secondary teacher and BCTF facilitator. 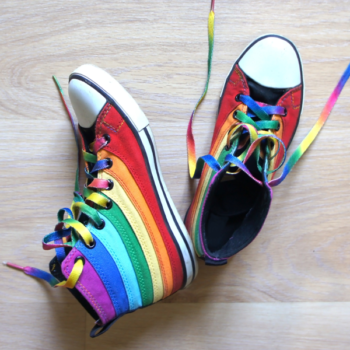