That weekend, I had decided to spend a bit of time with my youngest daughter who still lives in Halifax, where she was born, the city where I started teaching and where I lived for close to 25 years.

A direct flight after work took me there and I arrived at sunset. Having left the metropolis only 10 years or so before, I thought I could find my way fairly easily. I drove straight to the MacKay Bridge, forgetting that things have changed over time. The big Dartmouth Crossings shopping mall was built and the exit was somewhat different. I missed it. “Oh well,” I told myself, “I’ll turn right on Victoria Road and get on the bridge a bit further”. I vaguely remembered that the exit was a bit tricky and I merrily passed the tiny sign and the exit itself. Somewhat annoyed, I figured I could go directly to the bridge entrance through Windmill Road. That was how, by sheer coincidence—or call it fate—I ended up exactly where I started teaching, the small École francophone Shannon located under the MacKay Bridge, which seemed to be playing hide-and-seek with me.

Once I finally arrived at my daughter’s place, she asked me what I wanted to do the next day. I readily answered: “I’d like to go where it all started!”

The next morning, we were standing in front of this little school, located on a military base, where I started my career teaching a Grade 2 class. It was 1981, one year before the Canadian Charter of Rights and Freedoms was adopted. Children who attended the school then all came from military families and were mostly Francophones. Even before the concept was officially invented, we had classes devoted to bringing children who did not speak French up to par. These classes had less children than regular classes and we had an extraordinary team of teachers specifically trained to work on children’s language skills. At this point, you need to note that, until then, the school was funded by the Canadian Forces as it served its Francophone members. We had the funds to buy resources, to instigate our professional development, and to make sure that students were well supported. Some people might think it was the ideal school: I say it was a school as any school should be.

With the adoption of the Charter in 1982 came the possibility to access federal funding for official language minority schools. Hence, the Canadian Forces decided to pass their French-language schools on to local boards who would continue the mission. What was good for Francophone military families was also good for other Francophones of the society, right? This is how the École francophone Shannon ended up being incorporated into the Dartmouth District School Board, an English board which was probably wondering what exactly had happened…

And so this little school became a public school and we opened doors to all students based on the Charter’s criteria[*]. Soon the school became way too small, the number of children who required additional language skills support quickly exceeded the school’s resources. That is when the “portables” arrived. Simply said, the school’s success raised a series of unforeseen challenges that we were ill prepared to deal with.

It’s the parents who took things in their own hands. I was privileged to have my fellow teachers nominate me on the committee in charge of finding solutions. That is how I eventually became involved at the national level. Soon I became aware of the fact that thousands of minority Francophones, everywhere in Canada, were dealing with the same issues as we were. The committee soon gave itself a clear two-fold mandate: to get a new school and to have it governed by the Francophone community.

I still have a very vivid memory of the Committee’s first meeting with the then Minister of Education. Two or three of us, representing the Acadian community, were in the Minister’s office, somewhat intimidated by the protocol. After listening to our requests, the Minister answered rather categorically: “If those are the rights of the minority, you will get exactly what the Anglophones of the province of Quebec are getting: not more, not less”[i].

His unbelievable statement made it difficult to suppress a smile. Unbeknownst to him, he had just offered us a complete public education system, including language-based school boards and a solid network of universities! Although I am sure that the Quebec Anglophone community has its share of challenges, I have to say that its structures and institutions always have been and still are a source of envy for minority Francophones in Canada.

The reason I decided today to tell the story of my initial involvement in defending the rights—and needs—of Francophone communities across Canada is because of situations I have witnessed lately. This saddens me but reminds me of how important it is that both English authorities and French leaders be well informed, even more so today.

More than 30 years after the Canadian Charter of Rights and Freedoms was adopted and after many court rulings were made to clarify how to enforce the Charter in the context of minority language education, one wonders why the issue is still so widely misunderstood. How can we justify internal crisis between Francophone communities and the school boards representing them? Why do parents still have to take their provincial government to the Supreme Court so their children can attend a school as good as the neighbourhood school? Why do we question the schools’ entry criteria and have not yet been able to agree on how to open doors to immigrant children?

There is only one answer: Education. The solutions must move beyond confrontations and courts if we are to make headway. Since the very beginning of the recognition of educational rights to minorities, the Canadian Teachers’ Federation has unconditionally supported French education. More than ever, CTF maintains this support. Are you with us?

(a) whose first language learned and still understood is that of the English or French linguistic minority population of the province in which they reside, or

have the right to have their children receive primary and secondary school instruction in that language in that province.

(a) applies wherever in the province the number of children of citizens who have such a right is sufficient to warrant the provision to them out of public funds of minority language instruction; and

(b) includes, where the number of those children so warrants, the right to have them receive that instruction in minority language educational facilities provided out of public funds.

—Section 23 of the Canadian Charter of Rights and Freedoms

[i] Later, the Minister repositioned himself and, like most Francophones at the time, we ended up having to go to Court to gain the right to govern our own schools. 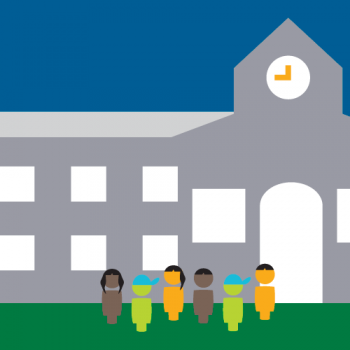