“Made in Canada” education privatization

Edu-business is a term used to describe the multi-trillion dollar education market. According to Edudemic, a pro-tech in education website, the industry is “not only huge; it’s also undergoing more changes recently than it has at possibly any other point in history. Startups are sprouting to fill in gaps and create new technologies to service this increasingly lucrative field.”

The door for privatization was opened wide by GERM, the Global Education Reform Movement, the nice folks that promote charter schools, voucher programs, increased competition between schools, test-based accountability and the narrowing of curriculum.

Education International is addressing GERM and privatization in a concerted and international manner.

In comparison to other countries, Canada has few private schools, so privatization and commercialization are not big problems in our country… Right?

And we don’t have edu-businesses encroaching upon our classrooms. Or do we?

And don’t we just love standardized tests? You don’t have to scratch the surface too deeply to find instances of both privatization and commercialization.

Our research into K-12 education in Canada shows a growing presence and involvement of edu-businesses.

Are any of these familiar to you?

Name the gap, and you can be sure some edu-business will offer to fill the need. Cash-strapped school boards are forced to play along.

The New York Times’ series titled Education Disrupted examines how tech companies are influencing education in the US. I would wager the same applies here in Canada.

Apple, Google, Microsoft, Facebook and other big names are competing to influence the subjects schools teach, the tools teachers use and fundamental approaches to learning through their philanthropy… and to access the multi-trillion education industry.

CTF was approached a few months ago by 3P Learning Canada wishing to advertise on our website and in publications.

As a teacher, I had heard of 3P. In fact, many schools have purchased their flagship product Mathletics which is used with upper elementary students as another tool to engage students in memorizing their multiplication tables. Once we had access to the full site, we found a much-loved and missed, previously free mini-site called Rainforest Math that had suddenly disappeared from the Internet…to where we didn’t know until purchasing Mathletics.

Our exploration of this Australian edu-business’s website revealed a new venture. 3P Learning has taken philanthropy to an entirely new level…a low level in my estimation. Since 2014, 3P converts students’ correct answers on Mathletics questions into points… that are converted dollar for dollar…into fundraising dollars for sanitation and water projects in Zimbabwe schools. So to recap, 3P promotes its product by using students as a means to raise funds for charity. Edu-business philanthropy indeed! Why not just contribute a donation directly to the schools in Zimbabwe?

Edu-business Nelson Canada and Disney Learning announced in July that they were banding together to offer resources for parents wishing to extend classroom learning at home. The news release reads: “The collection blends Nelson’s trusted educational content taught in Canadian schools with beloved Disney characters.” This is Disney Learning’s first venture—and certainly not the last—in Canada.

And Canadian companies are also eyeing for profit in the education sector. You’ve all heard about Learn Leap Fly?

The company describes the app as a social experience, with many children crowded around a tablet, with an intelligent interface that adjusts the challenge in response to a student’s comprehension. And I quote from their website: “The app is meant to support student learning when teachers and classrooms aren’t available.” The team tested the app in Kenya and now plans to head into Canada’s Indigenous communities, as well as to assist new Canadians and refugees.

And what about lack of school funding to support student learning by having well-equipped gymnasiums, classrooms, resource centers, technology, and space for support services. Much of the current education infrastructure is in serious need of renovation or replacement. And that gap, yet again, opens the door to the private sector and puts school districts and schools in a vulnerable position.

Several years ago Canadian Tire made an offer to provinces and territories in which schools were invited to complete a wellness survey and develop a wellness plan in order to receive a certain amount of credit that could be used to purchase physical education equipment from a list of items from Canadian Tire. Here is a business—albeit a great Canadian icon—letting a government, which was underfunding schools, get off easy.

We’re also seeing ideas, techniques, practices and language from the private sector being imported to make the public sector more “business-like.” For example, certain English public school boards in Quebec are referring to their students as “clientele”.

We’re also seeing ideas, techniques, practices and language from the private sector being imported to make the public sector more “business-like.” For example, certain English public school boards in Quebec are referring to their students as “clientele”.

And one of our Member organizations reported the employer using words like “efficiency, standards, outcomes and deliverables” at the bargaining table as if teachers were in the business of assembling robots.

The private sector, which is only accountable to its shareholders, is intruding into our democratic institutions which are accountable to all Canadian taxpayers.

If we had adequate education funding, privatization and commercialization would not be so invasive in our schools. Plus, what about the overemphasis on standardized tests as an accurate measure of achievement in learning. Their costs are high and the value, pretty low. There are better ways to measure and celebrate success than playing the numbers’ game.

Here’s an idea that’s worth emulating.

What is unique about these games is that, while there were some traditional competitions where there were winners and losers, there was also a focus on non-competitive sports such as archery, spear-throwing and traditional hand games. As well, athletes participated in social forums, youth conferences, showcases of Indigenous talent and traditions and in the sharing of traditional foods. This focus placed on the importance of community and on celebrating skills achieved and knowledge gained, rather than who is the best at a particular point in time, is one I believe non-Indigenous communities should emulate. A good place to start would be either the elimination of standardized tests altogether or at least a change to random sampling, if indeed it is a systems check that the government really wants.

In Canada, the Canadian Charter of Rights and Freedoms guarantees public education for all children regardless of any consideration. So the question begs: why are there insufficient human and financial resources to allow all Canadian children—especially Indigenous children—equitable access to quality public education?

We need to increase awareness among teachers and the general public. This involves reaffirmation of the value of public education and the necessity for public schools to be fully funded from tax revenues.
But we as a society need to take a step back and take an ideological and philosophical view around the privatization and commercialization debate.

We need to start viewing our students as the most valuable resource we have, and ensure they have the tools to engage in the ever-challenging economic future of our country. 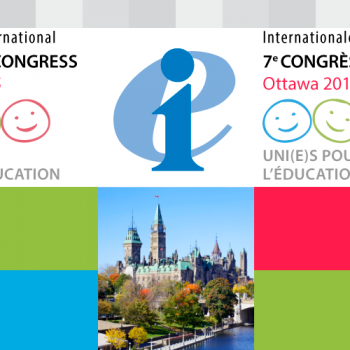