On Education and Democracy

“On Education & Democracy; 25 Lessons from the Teaching Profession is, first and foremost, meant to support classroom teachers; fighting their daily battles, confronting education authorities, governments and engaging with the community. We appeal to their professional ideals, to their ambition to make a difference for their students and the societies in which they grow up. We seek to remind them that the values underpinning democracy, social justice and human rights travel through our classrooms.”

In Western democracies, where free elections and human rights are taken for granted, democratic standards can easily slip away. We may not realize it, however, until we wake up one morning to find our professional and trade union freedoms amputated, our public services pared to the bone and sold to the market, our media brought into the hands of a few tycoons, and our politicians shamelessly exploiting racist and xenophobic sentiments. Apparently, democracy is a process that is reversible.

Why does education so rarely come into the public debate about the future of democracy? Perhaps, many do not see the intimate link between our profession, our professional unions, and the way our societies are governed. Or, it may be because we live in a short-term world with short attention spans and some find it difficult to address a future beyond the next election or beyond the next standardized test.

“Democracy has to be born anew every generation and education is its midwife,” wrote John Dewey more than one hundred years ago. At a time when new authoritarians are challenging the institutions of our representative democracy, including our labour unions, we should dust off Dewey’s legacy, as well as those of other philosophers like John Amos Comenius and Paulo Freire, all great sources of inspiration for the teaching profession.

Many classroom teachers, academics and education support staff are making tremendous efforts to help their students discover democratic and human rights values, to teach responsible use of the social media, to exercise critical thinking, and also to support young people’s initiatives to bring about democratic change in their communities.  They refuse to teach lies, let down their students, and betray their profession.

This can be a risky undertaking in places where the rule of law does not exist or where authoritarian rulers have a firm grip on the teaching and academic professions and on what is being taught in schools and universities. There are examples of great courage shown by educators and education unions standing up against the powers that be. In Iran, Bahrain, Hong Kong, and many other non-democratic countries or failing democracies, there are teachers who resist their schools being utilized as transmission belts of state ideology or religion. But sometimes they pay a very high price for their recalcitrance.

In established and emerging democracies, educating for democracy is sometimes also met with resistance. In fact, in some countries, right wing populists are attacking the teaching profession. Some want to enter our classrooms and tell us what to teach and what not to teach. President Jair Bolsonaro of Brazil, who accuses educators of teaching Marxist ideology in schools, has encouraged students to videotape their teachers and shame them on social media. President Recep Tayyip Erdoğan of Turkey fired thousands of teachers after the failed military coup in 2016, accusing them of being disloyal to his government. In 2017 he instructed the public-school teachers of Turkey to stop teaching the theory of evolution. President Victor Orban of Hungary recently took control of school textbooks which are now increasingly showing a narrow nationalistic view, while in Poland, public authorities are exerting pressure on schools to teach more about “family values”. In Italy, a teacher was suspended for two weeks (lifted after a public outcry) after her students compiled a video comparing new migration laws with the racial laws promulgated by Italian dictator Mussolini in 1938.  In the Philippines, teacher union leaders are placed under surveillance by President Rodrigo Duterte’s government.

In Germany and in The Netherlands, right-wing populist parties have established Internet platforms where students are invited to report left wing “indoctrination” by their teachers. Teaching climate change has been labelled by them as “indoctrination”. Last February, at a campaign rally in Texas, the son of the President of the United States encouraged his young audience to “Keep up that fight, bring it to your schools. You don’t have to be indoctrinated by these loser teachers that are trying to sell you on socialism from birth. You don’t have to do it.” Apparently, the gloves are off.

Is it not remarkable that those who challenge universal human rights standards and undermine democracy seem to be much more aware of the importance of education for democracy than those who claim to protect it?  For decades, main stream politicians have focused their education policies on keeping up with rapidly changing labour markets and boosting their countries’ economic performance in the global economy. It is telling that in the past three decades the international education agenda has not been set by the organization that was established for that very purpose, UNESCO, but by the World Bank, the largest source of education loans, and by the Organization for Economic Co-operation and Development (OECD), one of the most influential policy advisors for industrial countries.  In other words, not the education philosophers but bankers and economists have been guiding education and teacher policy development. The notion has faded that our public education systems are the best guarantee to keep democracies alive and fit.

But there are other factors. In too many places, public authorities have contracted out portions of their public school systems to private businesses and narrow interest groups, while introducing private business models and market mechanisms in schools and classrooms; welcoming standardized testing, league tables, the ranking of schools, high stake evaluation methods, performance pay and the application of management techniques directly imported from the business world.  Some time ago,  at an international gathering of education ministers and teachers’ representatives, the Secretary General of the OECD captured this philosophy in only ten words: “We should not waste money on what cannot be measured.” When these words are taken literally, public schools will no longer be the places where democratic and human rights values are passed on from one generation to the next, and teachers will become instructors keeping test scores rather than pedagogues cultivating student responsibility, imagination and creativity. Farfetched? In some low-income countries where public authorities have outsourced entire school systems, there are education entrepreneurs who have already done away with qualified teachers; replacing them with poorly paid classroom attendants reading from scripts and meticulously following scenarios provided by the company. Governments tolerating these practices are not just acting irresponsibly; they are self-destructive.

The narrowing of education to focus it on employment, the weakening of public school systems and attacks on the teaching profession are anti-democracy. There may be greater immediate threats to freedom, but damaged public school systems with shrinking mandates and under-valued professionals will not be able to perform the essential service of re-building understanding of democratic values, inculcating critical thinking, and encouraging active citizenship.

Carrying out the full mission of education to develop well-rounded human beings, not just cogs in the economic machine or objects of market attention, is vital if we are to build more decent, fairer societies with more hope and less desperation, and stronger, stable democracies. Education takes time to bear fruit, but it will take even more time if we, as trade unionists and professionals, do not make democracy an urgent and fundamental priority. 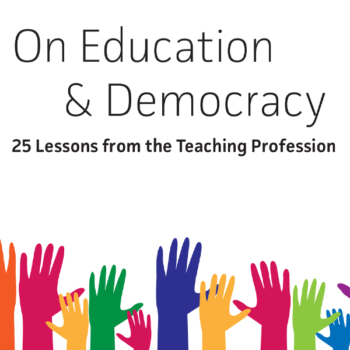