It was a tumultuous end to 2018 for teachers in Ontario.

In June, Ontarians elected a majority Progressive Conservative government under Premier Doug Ford. The new government immediately began implementing changes in the education sector, by repealing the health and physical education curriculum, launching public consultations on curriculum and pedagogy, suspending funding for programs, and openly questioning teachers’ professional standards and status. One week before the school year broke for the holidays, they unexpectedly clawed back $25 million from programs designed to help at-risk youth—many of which had been operating since September. The government has made clear that their long-term goals include cutting four per cent, about $1 billion, from the education budget.

There is great concern about what the future will bring, especially as teachers’ collective agreements expire on August 31, 2019. However, we can draw strength from the fact that we have been here before.

In 1995, the Progressive Conservatives under Premier Mike Harris began implementing their so-called “Common Sense Revolution,” restraining public spending by cutting social programs and taking on organized labour. The publicly funded education system was at the heart of the agenda. Minister of Education John Snobelen said he wanted to create a “crisis in education,” which would make it easier to implement sweeping reform.

By the summer of 1996, the government had already cut the number of school boards almost in half. Then they introduced Bill 160, the Education Quality Improvement Act, which, among other things, centralized education funding and decision-making, increased teachers’ workload, and threatened to replace qualified teachers with paraprofessionals or instructors. Part of the government’s strategy was to undermine public support for teachers and their unions, by portraying teachers as entitled and out of touch, and making the case that “union bosses” were working against the public interest.

The response from teachers was unprecedented. Thousands turned out for rallies organized by OECTA and other affiliates, and teachers played a big role in the Ontario Federation of Labour’s Days of Action across the province. Things came to a head on October 27, 1997, when more than 125,000 teachers walked off the job. They stayed on picket lines for two weeks, without salary or strike pay. It was not a legal strike action, but rather a political protest, the culmination of growing frustration at the government’s unwillingness to listen to reason.

The strength and solidarity of the movement was due in large part to the extensive efforts of OECTA and other teacher affiliates to keep members and the public informed. Regional meetings organized through the Ontario Teachers’ Federation brought teachers together to discuss strategies and messaging, and a variety of communications tools were used to make it clear to the public that teachers were fighting not only for their own rights and working conditions, but also for the learning conditions of every student in the province. As a result, teachers remained united even as the government denounced the protest and sought intervention through the courts, while many parents and students voiced support for teachers and delivered food, coffee, and good wishes to the picket lines.

The protest did not end with a decisive victory. Although the government abandoned some of the more egregious policy proposals, Ontario’s schools continue to reel from the damage they did inflict. Nevertheless, the experience left a lasting mark by galvanizing a generation of engaged teachers who had learned firsthand the importance of advocating for public services, workers’ rights, and the teaching profession.

“The protest was a catalyst,” says Liz Stuart, who began her OECTA journey during the Harris era as a staff representative and strike captain at her school, and now serves as OECTA President. “We had to listen to the government denigrate and attack our schools and our profession. I proudly held those signs and marched with my colleagues because I knew it would make a difference. We continue that legacy to this day!”

“It was the single greatest expression of political activism by Ontario teachers,” says Marshall Jarvis, OECTA’s current General Secretary, who was President of the Association at the time. “There will always be those who say, ‘Look at how it ended.’ But I say, ‘Look at what it started!’”

Since that time, Ontario’s Catholic teachers and their colleagues have been increasingly confident in speaking out about education policies, as well as broader social and economic justice issues. Teachers have established their authority as the frontline workers in education, and have helped to shape policies that have led to noteworthy progress on equity, inclusion, and student achievement. Unfortunately, rather than building on this success, the government is once again intent on scaling back public services and creating the perception that the education system is in need of major reform. We may soon need to recall the lessons learned in the 1990s. It will be important to keep members informed about what is going on and to prepare them for what is to come, as well as to continue building trust among the public. And no matter what happens, it will be crucial for teachers across the province to maintain solidarity and recognition of our shared values and priorities. The lessons of history tell us that dark days might lie ahead, but they have also shown that Ontario’s teachers will rise to the challenge of defending this vital public service. 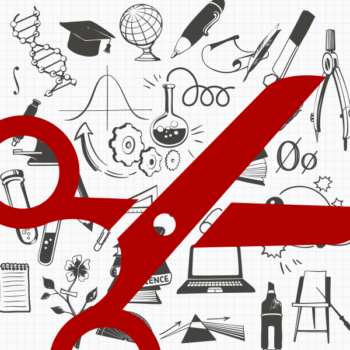