With a federal election on the horizon, we can expect to hear from some pretty reliable voices. Party leaders making promises, academics weighing in, community residents at town halls, journalists trying to quote them all. But what about people who want to speak up and aren’t sure how—like young adults with disabilities?

The Citizenship Project was an idea that came from the Miles Nadal Jewish Community Centre – Young Adult Accessibility Advisory Council, where young adults with disabilities gathered to discuss the types of programming that would best serve their community. The YAAAC identified that almost none of them had received a sufficient civics education in their Ontario high schools as the course was often cut in favour of literacy or numeracy classes. As a result, thousands of students with disabilities have graduated in Ontario—often eligible to vote—without a proper introduction to how government works, how governments can serve them, and how they can be active participants in making change.

As Liv Mendelsohn, Director of Accessibility and Inclusion at the MNjcc, was launching this project, she knew she wanted to co-create it with these young adults (18-35) who are systematically left out of so many civic conversations, and to make it accessible and engaging for youth with developmental and intellectual disabilities. The YAAAC worked with Liv to ask how they can raise issues that they care about, and identified key issues such as accessible, affordable housing, and accessible transit.

The Citizenship Project, funded by the Ontario Trillium Foundation, was divided into two semesters of six weeks. The first welcomed advocates, activists, civics organizations, politicians, and civil servants to speak on their areas of expertise. The first hour of each session focused on learning and discussion and after a snack break, the second hour was spent with Ahuri Theatre as a way to unpack the learning and explore the issues through art-making and theatre. The Citizenship Project is about getting people plugged into the world of advocacy but it is also about tackling isolation and creating a space where young adults with developmental and intellectual disabilities can relate to others with lived experience.

The sessions opened with a visit from CivicAction’s Executive Director, Sevaun Palvetzian, who gave an overview of levels of government and ways to become involved. Placemaker and author, Jay Pitter shared some activities designed to explore how people engage in public space, and how to feel comfortable taking up space. A visit from Bryan Keshen, CEO of Reena, a non-profit that offers housing for young adults with development disabilities, led to a passionate discussion about the group’s experiences trying to find suitable housing options in Toronto. Legendary disability rights lawyer David Lepofsky taught the group how they can become advocates by showing up for things they care about and using their voices to make sure they are heard. A session with the Accessibility Directorate of Ontario’s Alfred Spencer gave the group a closer look at how to live in this city.

The end of the semester offered a surprise visit to City Hall, where City of Toronto Councillor Joe Cressy led a tour and sat down with the youth in the Council Chambers—where the magic happens—and answered questions about what he does as an elected politician and how he serves people with disabilities. The group had a chance to discuss the issues they had explored with Cressy, and advocate directly for change. It was the first time any of the participants had been to City Hall!

The Project’s second semester exclusively focused on making stop-motion animated films with the Toronto Animated Image Society, linking lessons learned from the first semester with the young adults’ own interests and paths. At the end of this semester, the participants got to see their films on the big screen, along with thousands as part of ReelAbilities Toronto Film Festival.

The final piece of the Citizenship Project included a mentorship tailored to each person’s interests. Young adult leaders from the public, private, and non-profit sectors were paired with participants to come up with an advocacy action plan, from writing a letter to a politician, to making art, or to attending a community meeting.

One participant made a ‘zine’ about policing with the help of a local comic arts enthusiast and a communications professional. One young woman took issue with the lack of representation and engagement of people with disabilities by politicians, and together with a mentor, she worked on how to look up politicians, wrote a letter to each one, and was thrilled every time she received a response. This same young woman started the program quite shyly, and concluded the year by jumping at an opportunity to stand up in front of an audience of people she didn’t know to share her story of corresponding with her representatives.

This next year of the Citizenship Project will focus on the federal election. While some of last year’s participants had experience voting, all agreed that what occurred beyond the voting station (if they even made it that far) was murky, if not opaque.

They will dive in deep with 16 weeks of learning about how Canada elects its politicians and what happens afterwards. They’ll begin with a visit from Canadian Muslim Vote, and learn how it helps its community, which has a lot of first time voters, understand how to research candidates and platforms. The youth will then undertake a mock voting poll experience as part of Vote PopUp—a partnership with the Democratic Engagement Exchange at Ryerson University. They’ll learn from someone at Elections Ontario exactly how an election works and what it takes to make it happen. CIVIX staff will visit and explain the three branches of government and Samara Centre for Democracy will go more in depth about how people and things work inside and outside of Parliament Hill. And that’s just the first semester! Next semester they’ll meet with advocates and organizers and go on a field trip to Queen’s Park and meet a sitting MPP.

It can’t be understated: civics education is lacking in Canada. Giving people the opportunity to meet face-to-face with change makers and policy makers is vital to understanding this gigantic democratic system we live in, and to champion the voices we need to hear more. These young adults are bursting with enthusiasm and questions about politics and their country. They want to learn the who, the what, where, how, and why of what it means to live in a democracy. And with the Citizenship Project, they will.

Rachel Lissner is the Education Program Coordinator for Accessibility and Inclusion at the Miles Nadal JCC in downtown Toronto. In addition to her love of civics and coordinating the Citizenship Project, she also runs ReelEducation as part of the ReelAbilities Film Festival in Toronto, Canada’s largest film festival showcasing disability and Deaf cultures, based at the MNJCC.
ReelEducation is a free resource for K-12 educators to use film as a way to discuss disability, accessibility, and inclusion in classrooms. www.reelabilities.org/reeleducation﻿ 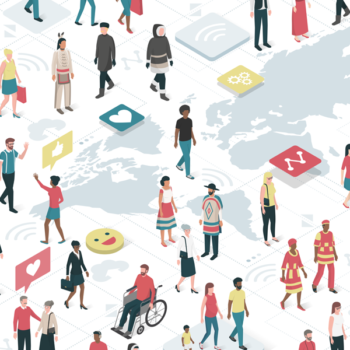