Public Education: The Foundation of Democracy

Before I was president of the National Education Association (NEA), I was a sixth-grade teacher in Utah.

I was the teacher who would spend summers thinking about what I could put on my walls and into my students’ environment to encourage their minds to open. I spent weeks pondering what I could do for them as sixth graders so that once they reached adulthood they would be ready to make their own unique and meaningful contributions.

That’s what public school educators do:  No matter their race, religion, ethnicity, gender identification, ZIP code, or parents’ salaries, we provide every child with a great education.

We help students understand why they must actively participate in their nation’s future, and not observe silently from the sidelines. We teach students to think critically, be curious, and ask tough questions. We help to lay the foundation our students will stand upon as adults when it is time for them to elect leaders. We help students to develop the capacity to notice when there is a need for change. Then, we help them to develop the confidence to create that change.

NEA member Stuart Wexler teaches an advanced government and politics class at Hightstown High School in New Jersey. He taught his students a lesson that to me provided a priceless education about the value of public education and democracy.

In 2015, Mr. Wexler discussed with his class the 1963 bombing by white supremacists of a Baptist church in Birmingham, Ala. The explosion killed four 14-year-old African American girls. Mr. Wexler’s class touched on how the successful prosecution of the bombers, nearly 40 years later, was sparked by a reporter’s discovery of evidence. He told his class that in 2015 some 100 criminal civil rights cases remained unsolved—that they had been investigated by the U.S. Justice Department, but because many of the witnesses and perpetrators had died, the department closed the cases.

The students responded to the lesson by drafting legislation, reaching out to a federal prosecutor for support, meeting with congressional staff in Washington, DC, and lining up co-sponsors. In 2017, the federal prosecutor was elected to the U.S. Senate, and introduced the students’ bill. Congress passed it last December, and in January the Civil Rights Cold Case Records Collection Act was signed into law. When someone asks me why public education and democracy matter, I tell them about Mr. Wexler and his forward-thinking, justice-seeking students.

Lately, I’ve had to admit that I’ve taken for granted that in an open, democratic society the moral arc of the universe would always bend toward justice—that the U.S. would keep finding ways to be more inclusive of folks who had been excluded, to give opportunities to folks who had so little, and to discover more ways to appreciate our diversity of cultures, languages, races, and our LGBTQ communities.

I have been forced to realize there are still people who are determined to take the U.S. back to when people knew their places:  where women got the coffee for men, people of color sat at the back of the bus, and LGBTQ people trembled in fear in dark closets. I take nothing for granted now. Instead, I know—beyond one shred of doubt—that moving the moral arc of the universe toward justice requires people to put their backs into it.

U.S. public school educators are putting our backs into creating education justice, and making clear that we have no use for those who respond to our dedication with indifference—with repeated cuts to education programs and funding, burgeoning class sizes, and continued low pay and low respect.

Early last year, West Virginia educators staged a historic walk out, which sparked the national #RedforEd movement, and quickly spread to states whose schools had buckled under a decade of extreme budget cuts. And we did not march alone.  Thousands of parents and concerned community members marched with us.  Suddenly, politicians everywhere were listening to us. They wanted to talk.

The momentum continued into the fall midterm elections. Educators helped to sweep pro-education candidates—many of them former educators—into office at every level of government. We also elected pro-education governors in seven states, and more than 1,000 educators were elected to local, state, and federal offices across the nation.

Looking toward 2020, we know Donald Trump must be defeated. Democracy is about respecting the rights of others, and relying on one another to be responsible for working together, being honest, being informed about issues, and showing up to vote. Students deserve a nation with a president who will respect our democracy—not tear it down.

And I believe something big is on the way. This year, Speaker Nancy Pelosi invited me as her guest to Donald Trump’s State of the Union address.  I, as an educator, represented one of several constituency groups who have been disrespected by the Trump administration that she wished to lift up.

Her pre-event reception was filled with senators and activists and leaders I’ve seen on TV.  One woman approached me with a big smile saying, “Lily!  I’ve always wanted to meet you!”  In this room of powerful leaders, I panicked a bit when I didn’t recognize her.  Then I saw that she was carrying a tray of dirty dishes.

I said, “You’re one of my teachers, aren’t you?  This is your second job?”  She smiled and said, “No.  This is my third job.” Evelyn Fabito was the most important person I met at that reception.  She is an NEA member who works as a public school educator outside of Washington, DC. “I do a lot of these catering events,” she told me, “But tonight, I see all these important people and I see you—the NEA president—right here with them. And I just know, something big is going to happen.”

Her words have changed my heart. There is no way I will let her down. Something big is going to happen in 2020, and the 3 million members of NEA are going to be leading it.

We will use our collective power to protect our democracy. For generations, educators have built this world’s future. Now, we stand ready to reclaim and reset the moral and educational compass globally. We stand ready to lead.  We stand ready to show the way forward so that each of our students knows exactly what democracy looks like. 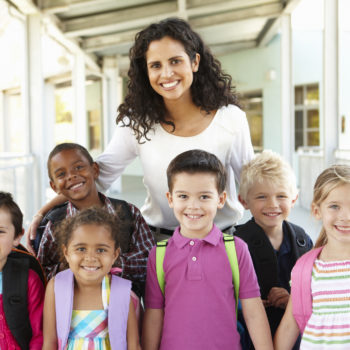