Students before profit: A global response to education privatization

“Students Before Profit” – the theme of the 2017 Canadian Forum on Public Education, held in Ottawa in July, brought together teachers and teacher leaders as well as representatives from school boards, government and NGOs to discuss issues related to the impact of privatization in/of public education, both globally and here in Canada.

This is not new terrain for the Canadian Teachers’ Federation (CTF). In 2006, we released a research report in collaboration with our education partners on the state of commercialization in Canadian public schools which garnered broad media coverage. We also worked closely with our allies to beat back the incursion of the Youth News Network (modeled after Channel One in the U.S.) in the late 1990s, prepared briefs on the educational implications of international trade and investment deals, and have written on public-private partnerships, school choice including charter schools, and other issues over the last two decades.

More recently, CTF has been actively involved in Education International (EI)’s Global Response (GR) campaign in which we produced a report on privatization of K-12 education in Canada based on a survey of our Member organizations in 2016 (PDF).

CTF also collaborated with EI and The Alberta Teachers’ Association on the We The Educators (WTE) initiative which seeks to start a new conversation about the future of public education including issues related to the intersection of technology and privatization – WTE was the focus of day two of the Forum.

Speaking at the Forum’s opening plenary, EI Deputy General Secretary David Edwards set the stage by highlighting a number of current global trends impacting on education. These include the growing inequality crisis, threats posed by international trade and investment deals (particularly Investor-State Dispute Settlement rules), and the attack on the ideals and practice of democracy which is stoking xenophobia worldwide.

In addition, Edwards emphasized that deprofessionalization – in which teacher knowledge and expertise is reduced to “content delivery”, standards to enter the profession are being lowered, and professional autonomy is eroded – is a major challenge confronting teachers and their unions.

Another major trend is increasing privatization and commercialization of education – by 2020, the global education market is estimated to be valued at an astounding $6.3 trillion ($3.7 trillion for the K-12 sector alone).

EI’s GR Project Director, Angelo Gavrielatos, described education as the ‘new frontier’ for privatization proponents as only a small percentage has been capitalized to date. Clearly the financial stakes are huge.

EI’s call to action on education privatization, adopted at its 2015 World Congress in Ottawa, comes in the form of the GR campaign. In framing the campaign, Gavrielatos began by stating that “this is personal” because “it’s about my kids, my neighbour’s kids … it’s about children and every child’s right to be taught by highly qualified well-supported teachers”.

The scope of the challenge is enormous, much bigger than any single union or country hence the need for a globally-based campaign. This challenge is made more difficult as governments retreat from the democratic space of protecting and promoting public education and other public services, described as the democratic deficit. As a result, this space is increasingly being populated by corporate and other non-state actors, all of which is being enabled by governments themselves. The GR campaign aims to pressure governments to reclaim this space and do what they’re elected to do – act decisively in the public interest by putting in place and enforcing the necessary legislative and financial frameworks to ensure the provision of high quality public education for all children.

The profit-making potential of the Sustainable Development Goals (SDG) is not lost on edu-businesses. As the SDGs were being developed, and SDG #4 in particular with its emphasis on ensuring all children complete free, equitable and quality primary and secondary education by 2030, edu-businesses were highly aware of the potential to exploit them for profit, particularly through so‑called ‘low-fee’ private schools.

Research underpins the work of the GR campaign in all of the target countries, and is used to support advocacy and political action. For example, research on the involvement of Bridge International Academies (BIA) in Uganda (PDF) (conducted by Canadian researcher Curtis Riep who presented his findings at the Forum) found that its business model is based on the following features:

This research played a role in supporting the Ugandan government’s decision to shut down 63 BIA schools last year as they were not compliant with legal and educational requirements in the country.

Gavrielatos noted that Pearson, the largest edu-business in the world operating in 90 countries including Canada, is different from other education corporations because of the influence it can exert on education policy at the global level. Indeed Pearson was contracted by the Organisation for Economic Co-operation and Development to develop the cognitive frameworks for PISA 2015 as well as PISA 2018. Pearson was targeted by the GR campaign because, as Gavrielatos noted, “we can’t take all of them on at once”, and successful campaigns are built around a specific target. Pearson’s business approach is to identify a ‘weakness’ in the education system such as low test scores (PISA, national testing programs, etc.) and then propose to address that weakness with its broad range of products and services, with the promise of improving performance. This is how Pearson comes to occupy the education supply chain.

Recognizing the challenge teacher unions may face in engaging with the GR campaign, given their full domestic agendas, Gavrielatos suggested integrating the campaign directly into the union’s core work – for example, by making the case that privatization is a huge threat to teacher salaries and working conditions, that it impacts negatively on economic welfare issues; as he stated, “privatization is the cancer that puts downward pressure on wages and working conditions”.

Because of their extensive global network, teacher unions are powerful entities in advancing this campaign – not only do they reach into every corner of the globe, they also have access to a powerful ally in parents and local communities.

Gavrielatos acknowledged the Canadian Teachers’ Federation for its strong support of the campaign over the past two years, emphasizing the need for more public conversations on these important issues. We The Educators provides an opportunity to do this; it is part of how we respond to the privatization threat. 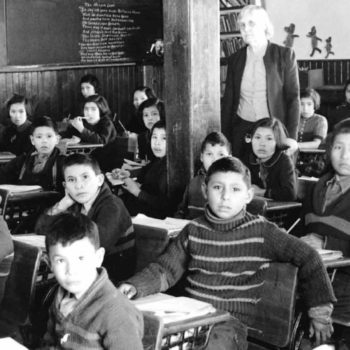