Teachers have a duty to trump the Trumps of the world

This article was originally written just prior to the election in the United States and published on November 8, 2016, in The Alberta Teachers’ Association (ATA) News. Since the original publication of this article, Sandra Jansen, a long-time member of the Alberta Progressive Conservative Party withdrew from the leadership race because of intimidation and harassment that occurred at the Party’s Annual Convention. Donna Kennedy-Glans, another long-time PC party member and former MLA also withdrew from the leadership race. In an interview, she stated that although she was not personally harassed and intimidated, she witnessed what was happening to Sandra, and felt there was no room in the party for her progressive platform. Within a week of withdrawing from the leadership race, Sandra Jansen crossed the floor to join the NDP caucus. In her opening Member’s statement to the Legislature, she read some of the hate-filled misogynistic messages she had received. As a result of some of the more violent threats she received, she has been assigned a security detail. Here in its entirety is the original article.

By the time you read this, the Sturm und Drang that was the presidential election in the United States will be over and they will have picked a new president. As the campaign was nearing its end, it seemed as if every day, Twitter was exploding with reactions to something said by Donald Trump, and I couldn’t help but think, “I am so glad I live in Canada”. But, as I listened to the news and read the online comments, I was reminded that the discounting of sexual assault and victim blaming in our society are prevalent everywhere.

I listened as countless men disavowed themselves from being associated with Donald Trump because they have a daughter, a wife, a sister and a mother. So, even in their defence of women, they claimed ownership.

I listened to someone who was in the running to become the next president of the United States claim that he couldn’t possibly have sexually assaulted one of his accusers, because she wasn’t pretty enough. I listened as countless men disavowed themselves from being associated with Donald Trump because they have a daughter, a wife, a sister and a mother. So, even in their defence of women, they claimed ownership.

I was also reminded that for a survivor of sexual assault, the daily dose of vitriol that accompanied each and every Trump revelation and accusation could trigger memories that would have to be dealt with again and again and again. Those memories might have started as a little whisper at the back of her mind reminding her that, for a woman, safety is just an illusion. But as the accusations piled up, and the Trump defenders got more strident, that whisper of fear became louder, until the roaring in her head could not be silenced.

You might be asking yourself why ATA News would publish an opinion piece about sexual assault and the American election. Because we live in a culture where we still teach young women to be careful how they dress and where they walk; that they should always watch their drinks so no one slips a drug into them; that they need to be careful not to drink too much at parties or “something” might happen. We live in a culture where a Canadian university student group thinks it’s OK to publish a songbook that contains multiple references to violent rape, murder, incest, bestiality and sex with underage girls. Maintaining the cultural status quo on sexual assault is wrong. It’s harmful to everyone — and upholding that status quo is what the term “rape culture” means.

We live in a culture where the seriousness of sexual assault is minimized, and victims are not believed.

We bemoan the fact that more women do not come forward and press charges against their attackers, and then we listen as an Alberta judge first repeatedly refers to the victim as “the accused” and then has the unmitigated gall to ask her why she didn’t just keep her knees together. We live in a culture where the seriousness of sexual assault is minimized, and victims are not believed.

Sexual assault victims are our colleagues. They sat beside us in the staff room and listened as Trump said that all his accusers were liars and that he was going to sue them as soon as the election was over. They listened as the people they spend their working lives with speculated about why these women came forward now and questioned the veracity of their accounts, even though we know that only two to four per cent of all sexual assaults reported are false. And as these women listened, they tried to hide their reactions, but the memories came rushing back and they just hoped the nightmares wouldn’t come back as well. And just maybe they were thinking, “Thank goodness I didn’t tell”.

As teachers, we need to know that 60 per cent of sexual abuse/assault victims are under the age of 17 and that 15 per cent of sexual assault victims are boys under the age of 16. These children are in our classrooms. We need to educate our young people that Trump’s comments were not just “locker room talk” or false bravado. We need to teach our young people that words matter! These discussions are not easy ones to have. They can open a minefield of memories or disclosures.

As I listened to Trump, I worried that we are normalizing his behaviour, behaviour that should be viewed as not just unacceptable, but criminal. And while I know that he does not represent all, or even many, people, he is a man with a microphone whose words reach far beyond the borders of the United States. It is not enough to disagree but remain silent — we all have a responsibility to step up and speak out if we have any hope of changing the culture, a culture that allows Trump and his many followers to think that what he says and does are OK.

If you need help, there is a network of sexual assault centres and services available to help you with 24-hour crisis support, plus counselling and other recovery programs. For more information, please contact the Association of Alberta Sexual Assault Services at 403-237-6905, ext. 3, or at https://aasas.ca/. 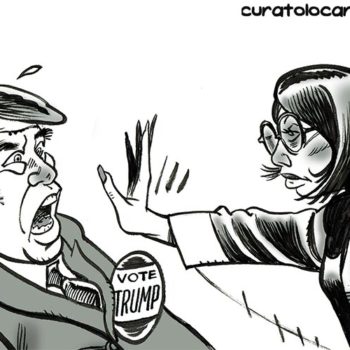