The Future of Canadian Democracy

Right now, a groundswell of engagement around the election is happening in communities throughout Canada.

Canadians are taking their responsibility to vote seriously and dedicating hours to the endeavour.

They are engaging in debate and discussion about the future of our country, researching the party platforms, consuming news from different sources, evaluating the leaders, and posing questions to their local candidates.

Although these Canadians are not eligible voters, they are a perfect example of what an engaged voter should be.

These are elementary and secondary students, and they are the future of Canadian democracy.

Student Vote Canada 2019 is taking place in more than 9,000 schools throughout Canada. It is estimated that 1.2 million students will cast ballots for their local candidates this month.

The program uses the election as teachable moment and enables teachers to bring democracy alive in the classroom. It is an exercise in deeper learning, exploration and connectedness, and in allowing students to practice the habits of active and informed citizenship.

It is a remarkable effort being led by as many as 25,000 teachers, from Masset, British Columbia, to Mary’s Harbour in Newfoundland and Labrador, and everywhere in between.

“We are just so grateful for the teachers that decide to take this up and who decide our democracy is important enough to bring lessons and activities about how to be a citizen into their classroom during an election.” (Taylor Gunn, President & CEO, CIVIX)

The History of Student Vote

In January 2002, Taylor Gunn set out to develop a program that would teach kids about voting, foster their connection to the community, and eventually reverse the decline of voter turnout.

The vision for Student Vote was inspired by a program in the United States that educated students about the democratic process before they reached voting age.

Students participated in classroom learning, family dialogue and a mock election experience. Student polling stations were organized by community volunteers in official polling places, with the purpose of students bringing their parents to the polls—recognized as the ‘trickle up’ effect.

With a very limited amount of resources, Taylor’s small team developed an engagement model for schools that would secure the participation of hundreds of thousands of students. Rather than student voting taking place at official polling stations coordinated by adults, the voting took place in schools, coordinated by students themselves—offering a more hands-on and empowering experience.

The first pilot project was organized in parallel with the 2003 Ontario provincial election, engaging more than 800 schools and 300,000 students.

Encouraged by the results, Taylor Gunn and his partner Lindsay Mazzucco began to expand their network across the country, offering the parallel election program in other jurisdictions. Student Vote soon became a meaningful tool for Canadian teachers as they delivered curriculum on democracy, government and elections.

Student Vote is now offered at all levels of elections in most provinces and territories in the country. And after 16 years, more than 5.5 million Student Vote ballots have been cast by future voters.

Student Vote in the Digital Age

One of the most significant threats facing democracies today is the proliferation of false and misleading information online.

The ability to assess information online has become an essential skill of citizenship in the digital age. This is especially true at election times when we receive many conflicting messages, and the source of information is not always clear.

The Student Vote program for the 2019 federal election incorporates a new set of tools and activities to help students become more critical and skilled information consumers, during the election campaign and beyond.

These activities allow students explore the relationship between the information we consume and the decisions we make, analyzing the impact of personalized and polarized newsfeeds.

It includes a special online e-learning interactive, FakeOut, that aims to build the habits for verifying information online. By evaluating the claim, source and image, students learn how to distinguish true from false information on the internet—in the game and in real life.

“You know it is a good lesson (FakeOut) when we run out of time but students stay during their break to continue!”

The activities also support visual literacy skills through the analysis of images from a variety of online and offline sources. Using the ‘Questioning Images’ framework, students evaluate the source, analyze possible meanings, and assess the purpose.

There is also a lesson dedicated to the role of journalism in democracy, where they explore the difference between news reporting and opinion journalism, and learn to assess news articles for evidence of professional standards.

CIVIX has encouraged schools to use these activities as a starting point for the Student Vote program before exploring the parties, candidates and election coverage. These activities are also designed to be engaged with once beyond the conclusion of this year’s election.

The countdown is officially on for National Student Vote Week, which takes place between October 15 to 18.

Outside of casting ballots, students will take on the roles of election workers setting up polling stations, supervising voting and counting the ballots. A truly authentic experience.

Student Vote Canada 2019 will be the largest student parallel election held in Canada, and as far as we know, it will be the biggest in the world. The program has been made possible by Elections Canada.

The purpose of the exercise is not about how students vote, but that they vote. However, it is always interesting to see how the next generation of voters views the parties and candidates and what they want to see for the future of Canada.

Following the close of polls on October 21, the Student Vote Canada 2019 results will be available at www.studentvote.ca/canada. 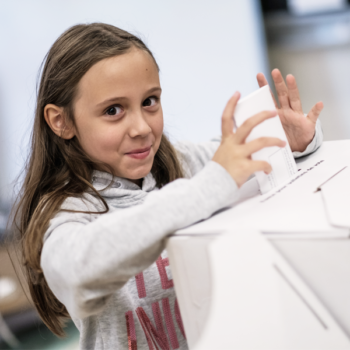