The Secret Teachers’ Organization in Poland

Heinrich Himmler, the head of the SS, stated on May 15, 1940, that “for the non-German population of the East, there should not be any schools at a higher level than four-year elementary school. The goal of such a school should be only simple counting, at most to 500, writing one’s name, teaching that obedience to Germany is God’s command, and honesty, diligence, and politeness.” Hans Frank, the Nazi Governor-General of occupied Poland, proclaimed: “Because the Polish male teacher, and even more so the Polish female teacher, are representatives of Polish chauvinism, which has to be accounted for politically, they should not be able to remain in schools and teach. […] Public schools should teach maths, reading, and writing, because schools are to prepare Poles for the role of a slave labour force. […] Poles are a nation that is not worthy of being counted among cultured peoples, a nation that has no place in the European community of humanity. ”

After their conquest of Poland, the German occupants set out to destroy the Polish educational system and eliminate Polish teachers, scholars, and scientists. They closed the universities and comprehensive schools. They allowed vocational schools to exist, but only as a means to create a labour force for the German economy. Public schools could also function, but without such subjects as the history and geography of Poland. Moreover, during Polish classes, instead of Polish literature the students were forced to “study” the Polish-language Nazi propaganda magazine Ster (“The Helm”). Despite those prohibitive measures and the threat of arrest and being sent to a concentration camp—even death threats—thousands of teachers ran the risk of secret teaching.

If Poles were asked what they thought was the Polish Underground State, the most common answers would be the Home Army, the partisans, or the Warsaw Uprising. But few would mention secret teaching.

However, secret teaching was an important form of fighting the Nazis. It helped uphold national identity. It was as risky as fighting with arms, but it was led by civilians. Its uniqueness rests with the enormous scale of the effort, with the spontaneous uprising of teachers initially, and with a growing involvement of their trade union. It was a phenomenon of a scope not seen in any other country in occupied Europe.

This form of resistance was forced by the nature of the Nazi occupation of Poland, which was significantly crueller than in other European countries. The Nazis, in effect, provoked educators to develop secret teaching on such a large scale. Since the first days of September 1939 the German occupation bore the features of a total war, which assumed the elimination of the Polish population.

Everyday life was filled with acts of terror which were ever crueller and refined. The Nazis above all intended to methodically destroy both the Polish intelligentsia and Poland’s cultural heritage.

There were mass arrests throughout the occupation, book collections and archives were set ablaze, and schools were closed. Poles very quickly felt the threat to their national identity. This explains the spontaneous response of teachers in organizing secret teaching.

Nobody had to recruit teachers for secret teaching. Before World War II, most teachers, more than 52,000 of the nearly 90,000 (including the catechists of all religions and university professors), were members of the Polish Teachers’ Union (ZNP).[1] If other teachers are included who were members of smaller professional unions to those in the ZNP, few teachers did not belong to the trade union movement.

With those organizational bases in place it was easier to create structures for the resistance. During the occupation the network of trade union branches worked as a system of communication and material help.

Thanks to secret teaching the nearly six-year period of the war and the
occupation was not completely lost for the education of children and young people. But there was another dimension to secret lessons: they raised morale, kindled Polish hearts during those horrific times, and proved that Poland exists as long as the nation lives on.

This unique history raises some issues that go beyond that point in time and beyond dictatorships. They include:

[1] The Polish Teachers’ Union (in Polish: Związek Nauczycielstwa Polskiego, ZNP) is the largest teachers’ union and the largest trade union from any sector in Poland. It traces its roots to 1905 when the first teacher trade unions were formed. The ZNP was born as a merger of two unions, both established in 1919, that merged in 1930. Shortly after the Nazi occupation, Poland was placed in the Soviet sphere of influence and a Communist government took power. The union was subject to the limits of that system and was briefly suspended during martial law in the 1980s. It re-gained its full independence in 1989.

The material on secret teaching the ZNP Poland is based on an English translation of articles from their publication “Teacher’s Voice”. It has been edited. In a slightly different form, this material was used as part of a book to be published by Education International (EI) in 2019: 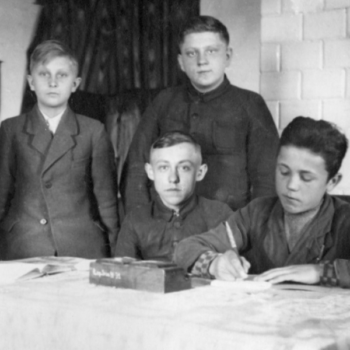