Right now, in Vancouver, Canada is hosting the Women Deliver 2019 Conference – the world’s largest conference on gender equality. That’s why, for the last 18 months, as Director of the Women Deliver 2019 Mobilization Canada campaign, I have used the opportunity that the Conference’s spotlight presents to connect with entities (academic institutions, teachers’ federations, businesses, cities, not‑for‑profits, etc.) in all sectors across Canada to push for real progress on gender equality.

As I prepare to embark on the biggest adventure and take on the most important job of my life – that of becoming a mother – I often think about how far I’ve come in my career, and how far I still want to go.

Many people assume that women1 simply don’t want to be in leadership positions. And I wouldn’t blame any woman for turning down or not seeking such an opportunity. I know I am overwhelmed. In addition to normal workplace stressors, women in a position of leadership still make less than their male counterparts and face second generation gender bias stress. This is, in my opinion, the most difficult barrier to cope with and to combat because it’s often invisible and it takes a huge toll on women’s internal sense of confidence.

According to researchers for the Harvard Business Review, second generation gender biases are “powerful but subtle and often invisible barriers for women that arise from cultural assumptions and organizational structures, practices, and patterns of interaction that inadvertently benefit men while putting women at a disadvantage”.  Second generation bias is not about intentionally excluding women, nor does it necessarily produce direct and immediate harm; rather, it creates a context in which women fail to thrive because of situations outside their control. For example, as a petite woman I often found myself in situations where men would naturally stand in a circle after meetings to discuss takeaways and next steps. It was common for them to not even notice me behind a much taller male colleague or make space for my inclusion. Was it intentional? Probably not, but it meant that I often missed out on important conversations.

Another common second generation gender bias is the way in which leadership tends to be judged in our society. The mismatch between conventionally feminine qualities (supportive, collaborative, etc.) and the qualities thought necessary for leadership (decisive, motivated, etc.) are seen as incompatible.  Women demonstrating leadership traits are portrayed – even by other women – as aggressive, abrasive and arrogant.  I was recently called out by another woman for not being sensitive enough in my communication style. I couldn’t help but wonder whether this would have been an issue if I had been a man. To me that comment glosses over the fact that I am assertive, a key skill that leaders need to possess.

These biases are unfortunately common across all sectors and keep coming up when I meet with different organizations from across Canada who have joined the Women Deliver 2019 Mobilization Canada campaign. From finance to sport to law and every other sector, there are too few women at the top. Even in fields like the health and education sectors, which employ more women than many other fields, men are still more likely to be in senior leadership positions.

In STEM (Science, Technology, Engineering and Mathematics) fields and in sports, women are almost completely excluded, and the consequences of this type of gender discrimination reach far beyond just the affected sector. For example, only 19 % of Canadian women participate in sport, compared to 35 % of Canadian men, yet, according to Jennifer Heil VP Sport Development at Via Sport and Olympian, 94 % of women executives have had formal experience in sport.

Clearly then, participation in sports enables people to develop key skills that will help them advance in their professional lives. But as long as women continue to face a culture of sexism, we will continue to see a similar trend – both in sport and in the workplace.

So how can we open more doors for women to participate? We must confront and change the second generation gender-bias dynamics that exist in our workplaces, society, culture and norms.

Whether it be through the school curriculum or through community programs, education can help foster healthier outlooks on gender roles and challenge deeply entrenched beliefs. Education and increased public awareness can also help counter the sexism that children are exposed to, and potentially even subjected to, from increasingly young ages.

Creating more opportunities for women also starts with creating a more inclusive environment. Efforts to recruit women to leadership roles are useless if companies don’t encourage a work culture where they can succeed. Mandatory workplace training on second generation gender bias can therefore go a long way in helping employees and executives understand the new face of gender bias and its differential impact on men’s and women’s careers.

We all have a role to play in championing gender equality and implementing concrete strategies that address the root causes of gender discrimination. Hopefully, the media attention the Women Deliver Conference generates will encourage everyone to pay attention to this important issue in the next few days, months, and years to come.

1For the purpose of this article, I use the term women to refer to women, and those who identify as women, in all their diversity. 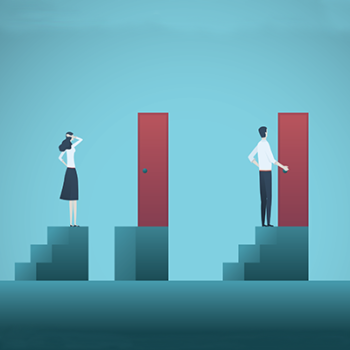