Living in French on Inuit land

The Trois-Soleils school is the northermost French-language school in the world. It is called Trois-Soleils (three suns) not only in reference to the parhelion phenomenon in winter, but as a reminder of the three languages in the community: Inuktitut, French and English. Set on the shore of breathtaking Frobisher Bay, the school is for Iqaluit’s French-speaking students.

Although the reason for taking this trip to Inuit land was to film educational videos, it was also a wonderful opportunity to explore the daily life of local Francophones.

Iqaluit is the capital of Nunavut. About 60% of the town’s 7,000 inhabitants are Inuit, and 1.3% are Francophone. While the Francophone presence in the area dates back several hundred years, it has only started growing in the past 30 years.

What are the links between Inuit and Francophones? Based on what Iqaluit
Francophones say, they are based on respect but could be further developed. In
fact, although Inuit are the majority, the challenges they face are similar to
those of the French minority, e.g. loss of potential speakers to English, lack
of resources in their language and a struggle with culture transmission, just
to name a few examples. “We feel we have a contribution to make to the
development of the Inuit community, but bridges still need to be built,’ says
an engaged Francophone from the area.

Living in French is not easy in such an isolated place. In the 70s, Bell Canada recruited a number of Quebecers to build the infrastructure the town needed. This group of young Quebecers particularly missed watching the Soirée du hockey (the French version of Hockey Night in Canada) and ended up founding, in 1981, the Association des francophones du Nunavut (the Nunavut Francophone Association). In fact, the Association’s very first goal was to ensure the broadcasting of the famous television program in Iqaluit. The Association was responsible for the TV signal until the turn of the millennium, when the rights were handed over to the local cable operator. Opening up a French-language school in Iqaluit was no easy task either. “By advocating for yourself as a community, you understand the Inuit community much better,” explained one of the first Francophone activists in Nunavut.

View from window of Trois-Soleils school.

As a sign of its integration into the community, the Trois-Soleils school incorporates Inuit values in its teaching. Throughout the school, students are clearly reminded of important values such as respect for others, open-mindedness, community engagement, consensus-based decision making, skills development strategies, concerted efforts, search for solutions and respect for the environment.

Some Francophones learned Inuktitut or can at least hold a conversation. “When a foreigner learns a bit of French, we always appreciate it. It just makes sense that we learn the basics of Inuktitut. It is a way to show respect.” It is a small gesture, but it means a lot when one realizes that Inuktitut is less and less spoken by Inuit themselves. In Inuit homes, where language transmission is most likely to happen, Inuktitut is less and less spoken.

A number of Francophones have also found love in the Inuit community. Meeting a French-speaking father and his son born of a marriage with an Inuit woman, brings a different perspective on the issue of links between the two communities. The father learned to speak Inuktitut, especially with the elders whom he describes as “teachers at heart.” “It was very important for me to bond with the family.” His son went to French-language school and is fluent in English and French. As with other young people I met during this short trip, cultural identity does not seem to be a major issue for them. They all have Inuit, French-speaking and English-speaking friends. And they speak whatever language is convenient.

Finally, to quote this father who puts all his faith in these youth: “They will be the ones who will bring the walls down and give Nunavut’s Francophonie a new momentum.”

Let us join him in the hope that the new generation will make the three suns shine for a very long time! 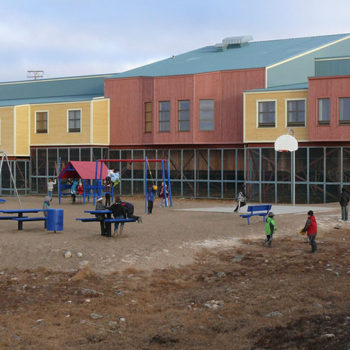