Reflections on Camp Vox: The art and science of political campaigning

In early October 2014, the Canadian Teachers’ Federation (CTF) hosted Camp Vox, a three-day event designed for staff from its pan-Canadian teacher organization members whose portfolios or roles included political action. The event was scheduled to occur well in advance of the next federal election. Camp Vox was co-facilitated by Graham Mitchell, Director of Training and Leadership at the Broadbent Institute, an independent, non-partisan Canadian organization championing progressive change, and Jesse Boateng, Program Manager with 270 Strategies, a US-based consulting firm involved in Barack Obama’s US presidential re-election campaign.

The learning journey at Camp Vox was cognitively demanding but unfolded at a humane pace. To be sure, the techniques and tools we explored together at Camp Vox have wider applicability beyond the relatively narrow confines of preparing for political campaigns. That was one of the things that participants appreciated most. Among other things, we explored some fundamental principles of sound campaigns, how to recruit and retain volunteers, and how to build and mobilize effective teams.

Over the course of my career in education, but most particularly in my previous capacity as an instructional and school improvement planning coach, I have facilitated many professional learning sessions with adults and also participated in staff development sessions. As a consequence, during professional learning sessions in which I am a participant, I tend to keep one eye focused on the content and the other eye on the process as the facilitators shepherd us through a learning journey.

At Camp Vox, I appreciated the fact that Mitchell and Boateng were consistently explicit during the process about what, how, and why we were doing activities or tasks. That transparency contributed to even deeper learning. Furthermore, they provided a balance between theoretical and practical elements. Throughout the three days, they provided a variety of opportunities for us—in pairs and small groups—to refine our understanding of, and to apply our learning about, tools and strategies in the context of developing a campaign. They also helped us surface the expertise and resources already available within our own political toolkits and then add a few more. Finally, they were purposeful in honouring and drawing upon the wisdom and experience, both individual and collective, of participants from CTF’s member organizations.

Among others, Mitchell and Boateng reinforced these big ideas about education-focused political campaigns:

As I began by saying, many facets of Camp Vox, from building teams to recruiting and retaining volunteers, were valuable. However, of all the many useful aspects of Camp Vox, two segments resonated most for me.

By way of introduction to the first segment, here’s a question for you, the reader. Reflecting on your own experience, have you ever injected a professional or personal story to help you connect or engage with an audience of students, colleagues or another audience? I suspect that almost every one, on at least one occasion, has done so, either purposefully or spontaneously.

Like many of you, I have often interwoven stories into my work, but I also confess that I had never quite thought of the clinical construction and subsequent strategic use of a story in the kind of scripted fashion that Mitchell and Boateng modeled. As they put it, each of us has compelling stories to tell and draw upon to help us connect with others. Our personal stories, which we choose to embed and share as part of a public narrative or message, help us transmit our values and beliefs, elicit empathy, advance a perspective by way of shared or similar experiences, further an agenda, and provide a rallying call that can compel others to action. The arc of the personal story and its components in sequence are: the challenge → the choice → the outcome → the ask.

Initially, as we began to explore the power of the personal story and were introduced to a template to structure them, a number of participants wondered aloud whether the “template approach” to developing a personal story might undermine its genuineness or come off sounding too rehearsed. Mitchell and Boateng underlined the fact that the personal story, especially when it is to be used strategically, must be credible and authentic or grounded in a real experience; otherwise it will, indeed, be perceived as disingenuous and its use will likely backfire. At first, these templates may seem artificial but, over time, they will come to feel more natural as they are used more frequently.

Coming out of Camp Vox, I committed to myself to work through this template and model to further refine at least one of my own stories which I could put to some future use. Mitchell and Boateng reinforced the fact that it takes work to polish and refine a personal story for strategic use. And, so, in the interests of putting the story out there, here’s my scripted personal story. I might consider inserting this story if a potentially difficult education-focused campaign is about to get underway. As you read along, see if you can clearly trace the story arc (challenge, choice, outcome, ask).

In June 1995, my students were preparing for the final evaluations in a secondary, senior law course. They were also eagerly anticipating their formal (the prom). Students asked me to attend their formal as a teacher chaperone and I enthusiastically agreed.

However, a significant wrinkle in that plan soon emerged. You see, staff at the hotel at which the formal had been booked months in advance went out on strike. Now, I had to wrestle with two competing priorities. On the one hand, students with whom I had a great student-teacher relationship were counting on me to attend; on the other hand, my support for labour and unions precluded me from crossing the picket line of fellow workers. I was faced with a real conundrum. What was I to do?

I thought long and hard and made a difficult choice: I would not cross the picket line. But I felt I owed it to my students to be upfront and clear about the reason for my choice and I explained exactly why I could not violate a core tenet of my belief system. They were disappointed.

But, the day before the formal, two students brought me a white boutonniere and said they just wanted me to know that they understood and that they knew I’d be with them in spirit.

So, here’s the thing. In the campaign which we’re about to undertake, you may be asked to make some hard decisions—ones that challenge you to reconcile competing interests. You, too, may find yourself between the equivalent of a white boutonniere and a picket line, but I’m asking you to consider putting aside the former so that, together, as one, we can ensure that, in person and in spirit, we can achieve our common goal and present a united front.

Now, think back. Could you see, hear and feel the transition between the four components as they played out in my personal story?

The second segment of Camp Vox that continues to reverberate for me was the idea to deliberately seek out atypical campaign allies. To underscore why this is indeed helpful, consider this story. Prior to the CTF staff meeting, I happened to be listening to a CBC Radio program which focused on the characteristics typically shared by those who survive crises. One of the key characteristics was mindfulness. And to illuminate its importance, one of the guests shared the story of an agent with the Federal Bureau of Investigation. The agent in question was convinced that, at some point in his career, he would be faced with the need to disarm an assailant; so, over the course of some time, he practiced with a partner taking a weapon from his “opponent.” During the course of his self-directed training regimen, he would take the weapon from his partner, return it to his partner and repeat the process. After much training, he became quite adept to the point of automaticity.

One day, during the course of his duty, he was, indeed, faced with an armed opponent. He quickly disarmed him but, because of the ingrained routine he had followed during his training sessions (take – return – take…), he promptly, and without conciously thinking about it, returned the weapon to his assailant.

And here’s the parallel between that story and our work in education-focused political campaigns. In our commitment to our campaigns, we all run the risk of becoming enslaved by or enamoured of our own organizational “personal” stories or perspectives. Greg Jodouin, LL.B., partner at the PACE Consulting firm, who also shared his insights and expertise with us in the latter part of Camp Vox, suggested that one of the remedies for this potential behavior is to seek out atypical campaign allies, not just the usual suspects. They help to interrupt our tendency to become acritically self-absorbed. Unusual allies, then, provide a foil for us. The alternative is that, unwittingly, we might provide our opponents with the instruments to undermine our campaign and effectively set us on a path toward ignominious defeat.

To be sure, Camp Vox provided us all with much to think about. It afforded us with opportunities both to reinforce and reexamine some of our prior knowledge and skills about campaign design and roll-out and also to add some new tweaks, tips and tricks. The next step, of course, is to integrate and harness the new-found learning in our own respective campaigns and work.

This article is based on remarks made as part of a four-member panel at the CTF National Staff Meeting on November 21, 2014. 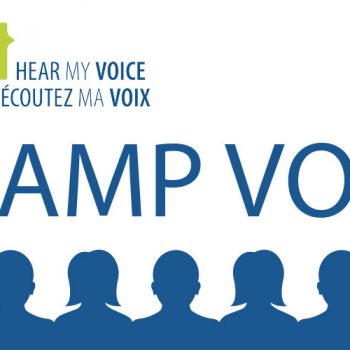